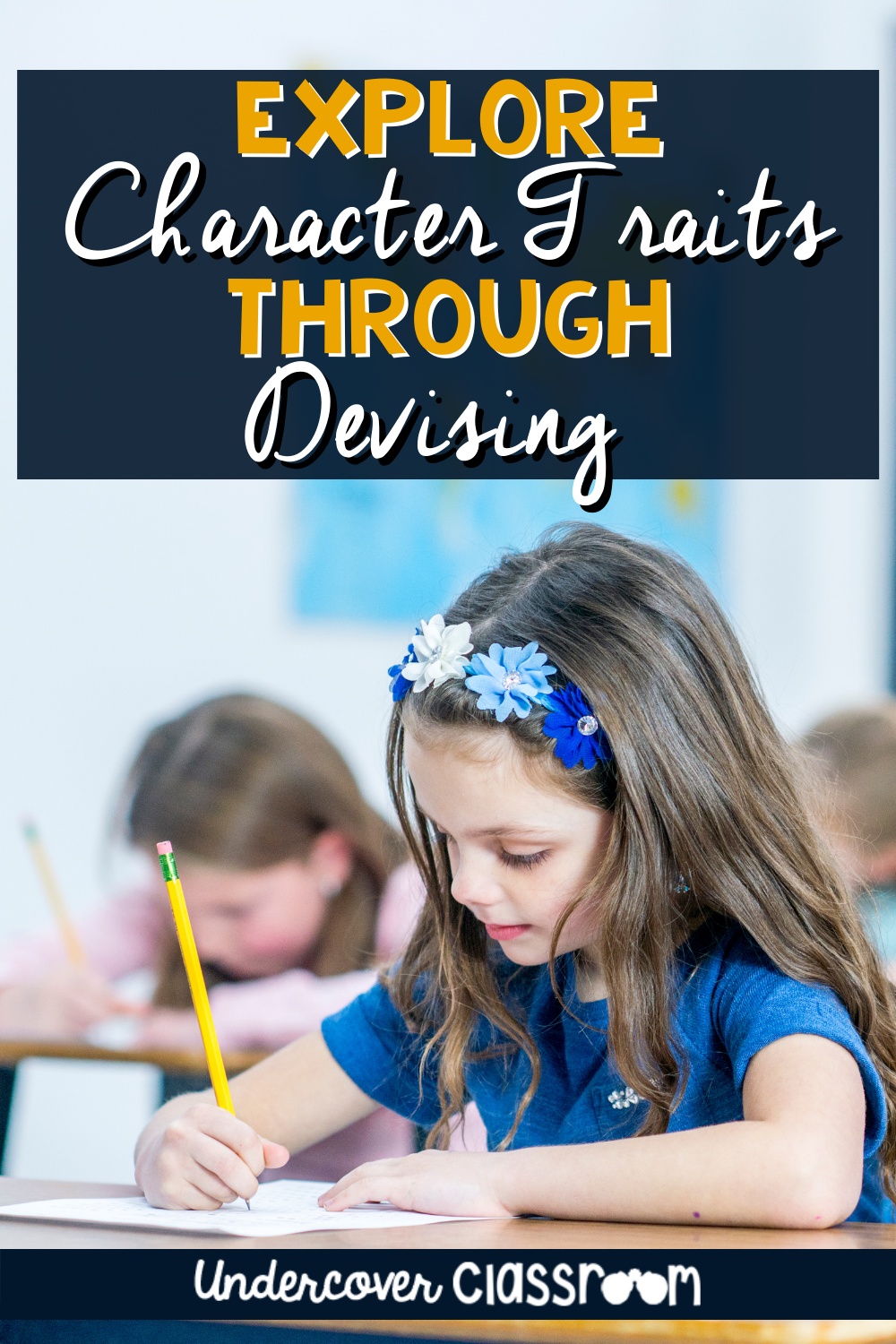 Often when teaching about character traits, we focus on helping students to consume information, but we can help students take their understanding to the next level when we allow them to explore character traits through devising.

Learning about character traits is really about learning to observe characters and people around us. We spend our time investigating how the character acts, what they say, and what they like. Then we use that information to deduce more information about their personalities and how they will respond in different situations.

Consider some of your favorite children’s book series. No matter what series you choose, you can think back to the characters within and see that each character’s primary traits carry through from one book to another.

The character’s traits shine through no matter the environment.

One fun way to help students explore character traits is through devising.

Devising is the practice of planning, creating, or inventing something new, and it melds and marries nicely with many other character trait activities you may already be exploring with your students.

When practicing devising for the sake of exploring character traits, it is easiest to either have students create something new out of something that already exists, or take what they learn from an original source and use that information in a new situation. No matter which direction you decide to take with devising, it is best to start with a base activity and build from there.

Use the old to make something new 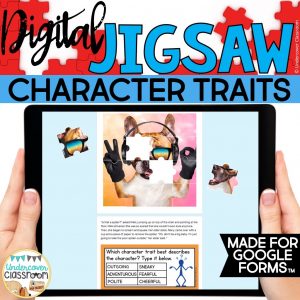 Let me give you an example using one of my own character trait resources as the base activity.

In the Character Traits Digital Jigsaw Puzzle, students are asked to read a short reading passage. Students are then asked to identify a trait associated with the character based on what they say, how they act, and how others respond to them in the passage.

If we are going to practice devising by ‘having students create something new out of something that already exists,’ we might ask them to first go through the Character Traits Digital Jigsaw Puzzle identifying the correct character traits, but rather than stopping there, we then would move on to a devising activity.

We begin by asking students to go through the activity a second time (possibly with a partner) and attempt to write (or devise) an altered version of the reading passage that would make one of the other answer options true.

This is an example of a reading passage that may be found in the original activity.

Dylan knew exactly what he wanted to do for his 12th birthday. He wanted to go hiking to the horseshoe bridge and then go bungee jumping! It sounded like such a fun, exciting, and electrifying experience. Dylan couldn’t imagine anything better or more suited to his interests. Now, if only he could convince his mother to go along with him.

The answer options may include traits like shy, adventurous, funny, or fearful.

Obviously, we know the answer is adventurous, but in this devising activity, we are going to ask the students to change the passage to reflect one of the other traits listed.

Now, it may be hard for students to get to this place by themselves, so we can scaffold it with them by breaking the process down into steps.

For example, by changing ‘hiking to’ to ‘read by’ and ‘bungee jumping’ to ‘a movie by himself’ the passage begins to say something completely different about Dylan.

Dylan knew exactly what he wanted to do for his 12th birthday. He wanted to go read by the horseshoe bridge and then go to a movie by himself.

By making small changes, like those that we made to the first couple sentences, Dylan’s identified character trait may be shy instead of adventurous.

Extension Activity: A fun addition or extension for this first devising activity is to challenge students to adjust the character trait by changing the least number of words possible.

Now, using the same passage, we can consider devising in a different way. 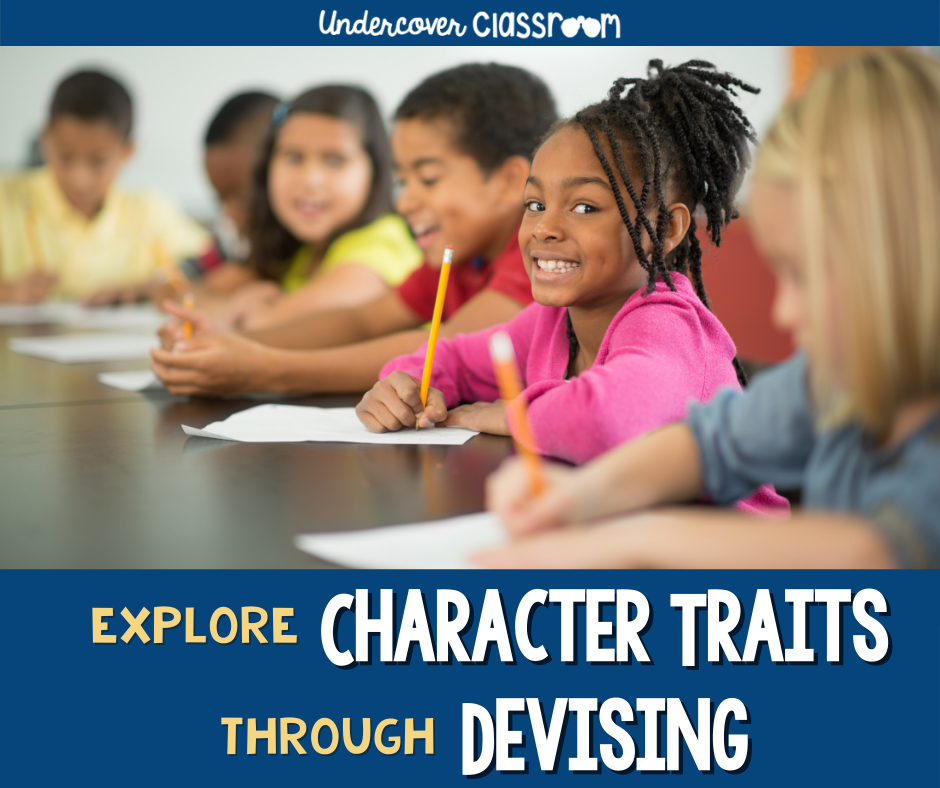 Same character in a new situation

This time as we explore character traits through devising, we are going to consider the information we already know about Dylan, and write a whole new passage about him.

We don’t have to use the same exact details, but we will use details that align with the character traits we already have assigned him.

Here is an example.

Dylan was not excited about the trip to the library. Sitting quietly was not one of his favorite activities, but when he found a world travel book sitting on one of the tables and started flipping through the pages, he could have sat there all day. He loved seeing all the fun trips people could go on all around the world. He immediately imagined swimming with dolphins, hiking the rainforest, and seeing the pyramids in person. He asked the librarian if he had any other books like the one he had found.

This passage could easily be about another moment in Dylan’s day, but even though he is in a library, we still see his adventurous side through the details.

A fun way to do this devising activity is to randomly assign students different locations or situations to create passages about.

For example, one student may write a passage about Dylan at a carnival, and another one may write about Dylan in the lunchroom or at a football game. Seeing how students take this character and place him into new situations is fun.

You can take the activity one-step further and/or combine it with your study of theme and main point by taking some of the students’ passages and expanding them to create picture books based on the character’s experience. Just as Ms. Frizzle and the Magic School Bus class are going on lots of adventures, Dylan could have a whole series of adventures as well…all stemming from one little passage.

A key part of this process is to start with a passage-based activity and then building from there. By using the passages from the Character Traits Digital Jigsaw Puzzle students have a starting point from which to expand their learning, and teachers have passages that will be the perfect starting point for either of these devising activities. The jigsaw puzzle activity also has several other passages and characters for students to explore.

Learning and teaching about character traits is such a fun part of the reading comprehension process, and by adding in a level of creation through activities like the devising activities suggested in this post, students get to play around with characters making them both more real and dynamic.

Want to know more about lapbooks? Check out this post about creating lapbooks for your students!