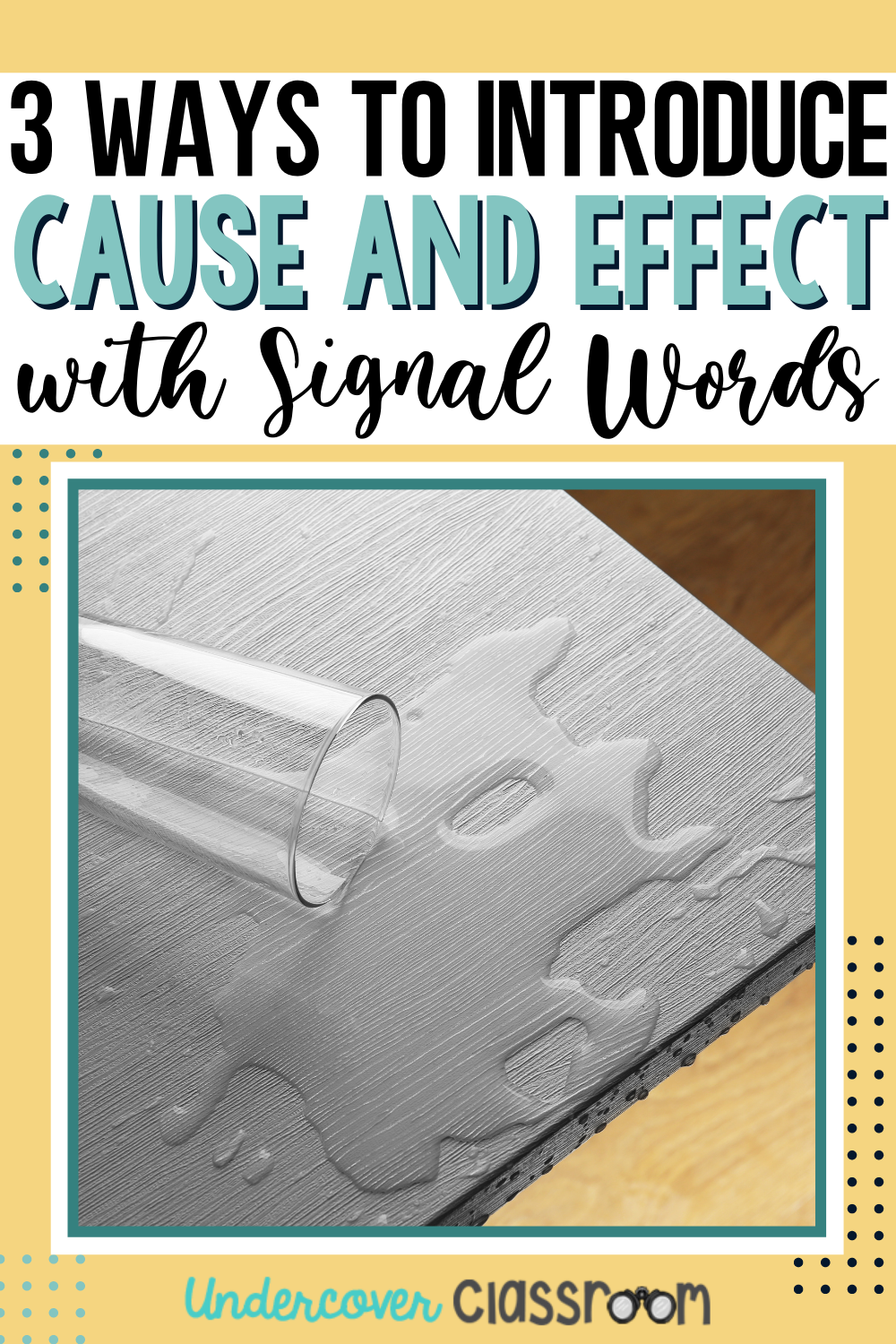 Use these activities to help your upper elementary students explore how signal words can be used to identify cause and effect relationships.

Teaching cause and effect is something that starts very young. From the first moment you try to explain to a child why they can’t have candy at 7:00 pm, or why they shouldn’t run with scissors, we are desperately trying to help kids understand that we aren’t just telling them these things to be mean, but rather because we understand how cause and effect works and how the results of certain actions directly correlate to an earlier choice.

It can be so aggravating as we try to help kids understand cause and effect and no matter how hard we try, ‘because I said so’ often becomes our go-to response even after several minutes of trying to explain our reasoning.

Memories and experiences like these (which hit a little too close to home for me), help remind me why teaching cause and effect and growing student understanding of cause and effect can be so life-changing.

Teaching Cause and Effect in Upper Elementary

As we teach cause and effect at the upper elementary level, we are now beginning to focus on it in a literary context which is sometimes difficult for students to grasp. That is why I love using signal words.

Today we are introducing 3 ways to introduce cause and effect through the use of signal words. Each of these lessons is designed to help students explore the connection between cause and effect and signal words naturally, without the teacher explicitly discussing it with them until after their understanding has already started to develop.

Teacher Tip: Try one or try them all, but remember, your job as the teacher in these activities is to observe and watch for them to discover the connection between signal words and cause and effect on their own. Don’t be afraid to let them explore!

To begin working with cause and effect, ask students to brainstorm different situations that might occur if a specific action takes place. (For example, what might happen if I spill this drink on my desk?)

Give students a few minutes to work together to create a list of possible ramifications for that action. Then, ask students to use one of the results on their list to write a full-blown sentence or mini-paragraph describing the fictional event.

For example…When Mrs. Smith spilled the drink on her desk, all of her papers got wet, and her computer stopped working because the water got on her keyboard.

Then, ask students to write the same scenario by reversing the events. The sentence will now be rearranged so the result is actually presented before the action.

Example…Mrs. Smith’s computer stopped working because she spilled her drink on her desk. Since the water also got on all the papers, they were ruined too.

The reason we ask students to write the same information in a different way is to draw out the vocabulary a little and see what words they use to describe the situation in different ways.

Now that they have two cause/effect examples to work with, ask students to group up with others and think through the examples they wrote.

The groups will consider their examples and attempt to identify common words they used that specifically linked the actions and the results or the cause and effects.

After students identify some signal words, write them where the class can see them, and then introduce some other signal words and ask students to practice using them within the same scenario.

After creating more examples, give students a resource (like the Cause and Effect Digital Jigsaw Puzzle), and ask them to work through it looking specifically for the use of signal words. 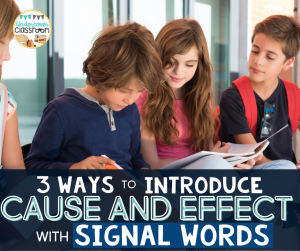 #2 | Reverse Engineer Cause and Effect by Starting with Signal Words

Another way to go about introducing cause and effect is to help students get there on their own.

This is more of a discovery-based activity, and it takes a certain amount of holding back as a teacher to just let students explore without giving away your goal, but that is what I want you to try to do here.

To begin, hang up poster boards or large post-its around the room.

Then ask students to travel around the room in pairs. Each pair will create a sentence that uses the signal word, and write the sentence on a sticky note that they will stick to the back of the poster, and then copy the sentence onto a sheet of paper they will carry around with them from station to station.

After the students have visited every poster, ask students to move to the poster they started with, pull all the sticky notes out from behind the poster, and read through them.

Ask the students what similarities they see in the sentences? What differences? Generally speaking, we want them to consider how the word is being used in the sentences.

After a few minutes, ask the students to leave the sticky notes in their workstation exactly as they currently have them and move to the next poster. There, they will look at what the group before them already did, and consider why that group chose to arrange the sticky notes in that way. Then, they can start rearranging them in their own way.

After the second station, as a large group, discuss what the students observed.

The goal is that the students will begin to notice the cause and effect nature of the sentences created without being told that was the point. This can then lead to a discussion about signal words and how they can be used to identify cause and effect scenarios in literature.

Often when doing an activity like this, teachers are concerned about what to do if the students don’t figure it out on their own. Do not worry, my friend. If none of the students get there on their own, simply share it as one of your own observations, and ask students to check the examples on their current poster to see if they also see evidence of cause/effect scenarios. This will likely lead to even more conversation. 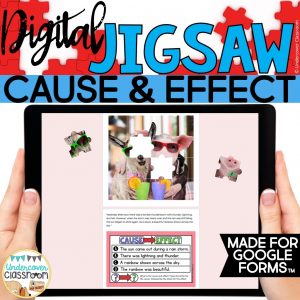 The idea of using examples and non-examples with students has been around for years, but the power of these types of activities when learning something new is incredibly powerful.

After your students have separated the examples out, ask them to explain why they chose to separate them the way they did.

If none of the groups are able to correctly figure out the examples and non-examples, you can listen to what they came up with, applaud their creativity and efforts, then tell them about cause and effect, and ask them to go through the process again.

Once they have finally separated the examples and non-examples, ask the students to look for and discuss the common language that is found in the examples. This will then naturally lead to a conversation about signal words and how they work to help us identify cause and effect relationships. 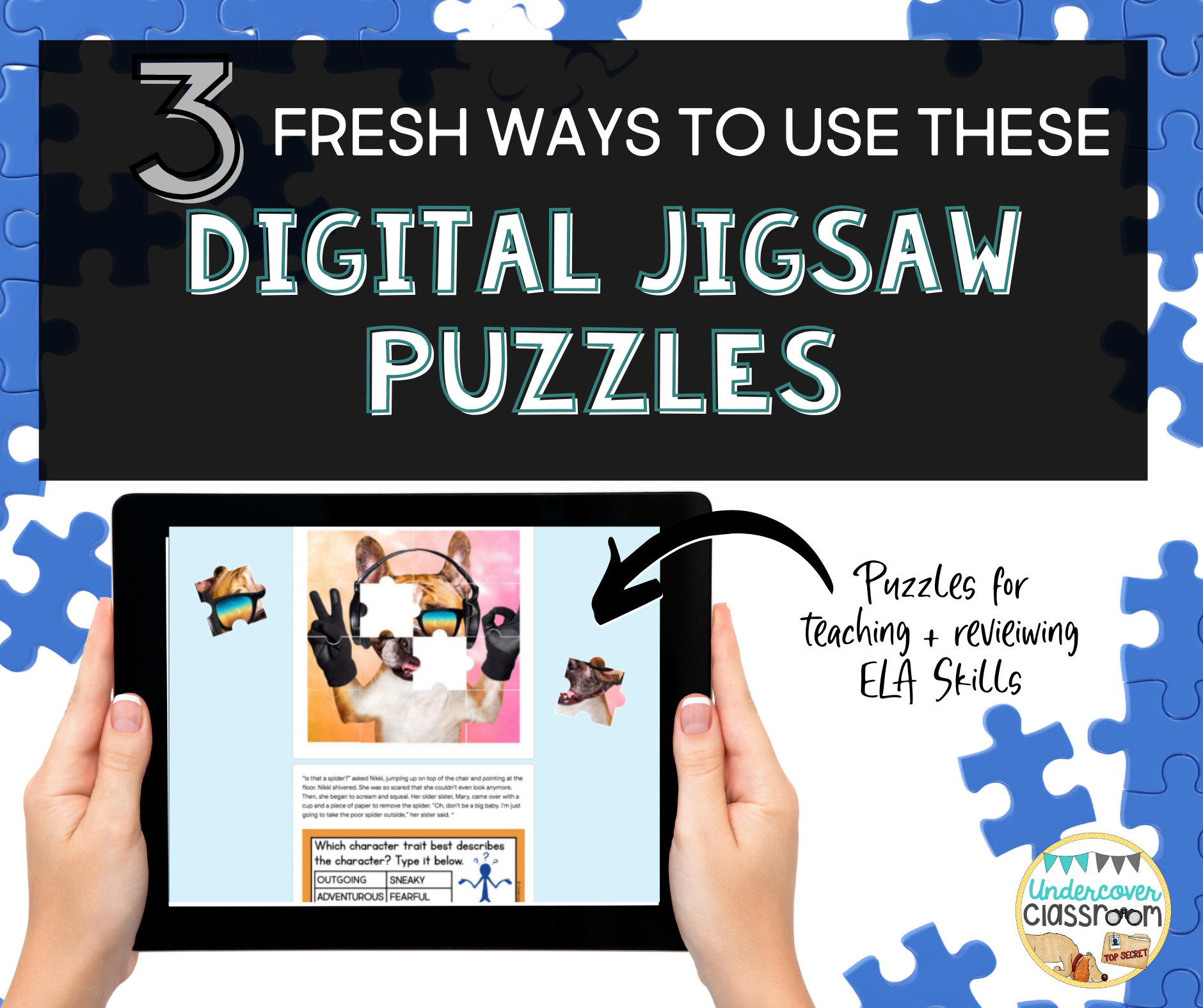 Each of the activities in this post is a great way to introduce both cause and effect and the use of signal words to identify cause and effect relationships. If we start with these kinds of discovery activities and then lead into resources like the Cause and Effect Jigsaw Activity, students will get a well-rounded introduction to this literary concept, plus plenty of practice identifying it.

But why stop there? We have even more ways to use our Digital Jigsaw activities in the classroom that you can mix and match into these lessons too. Check them out in this post!